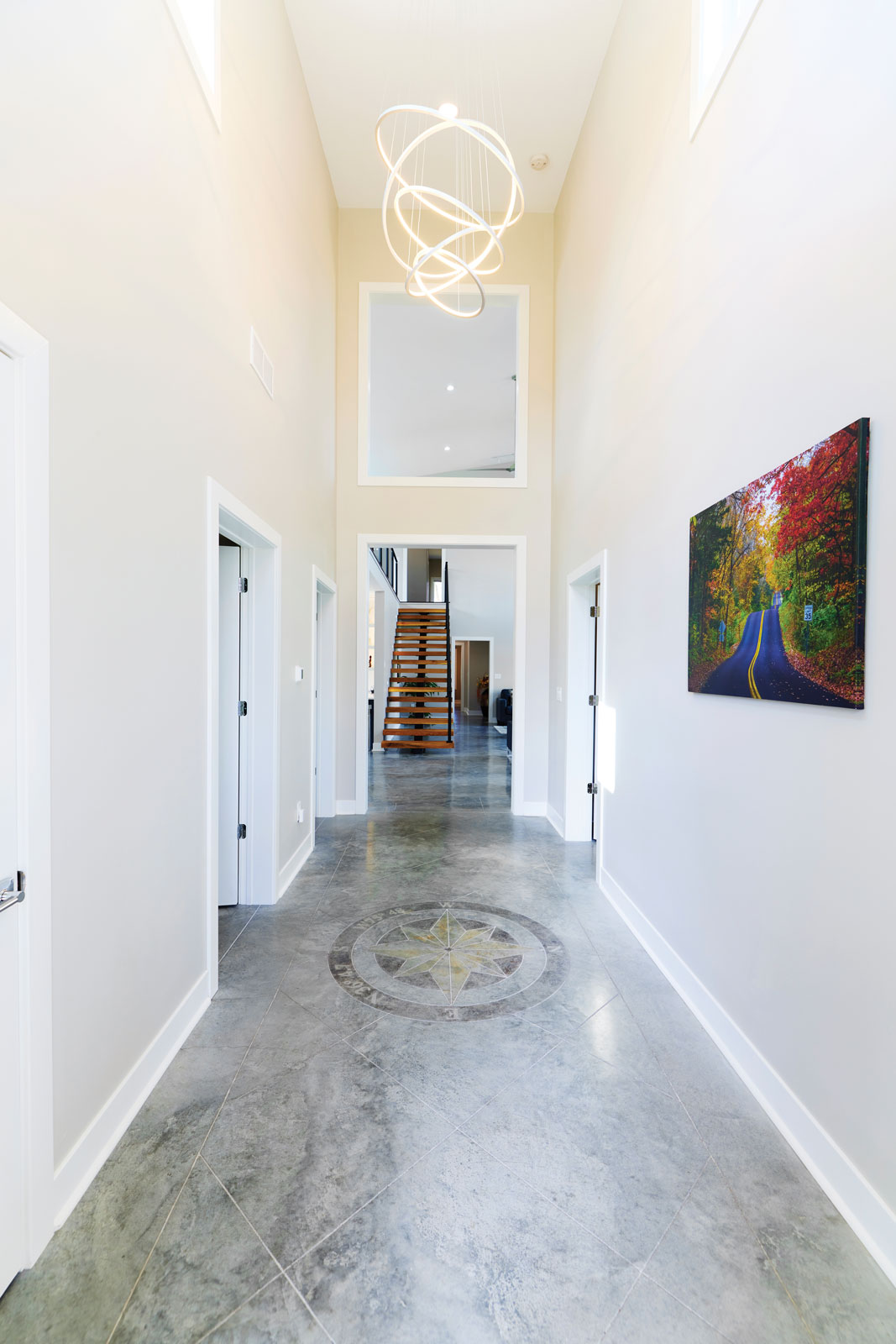 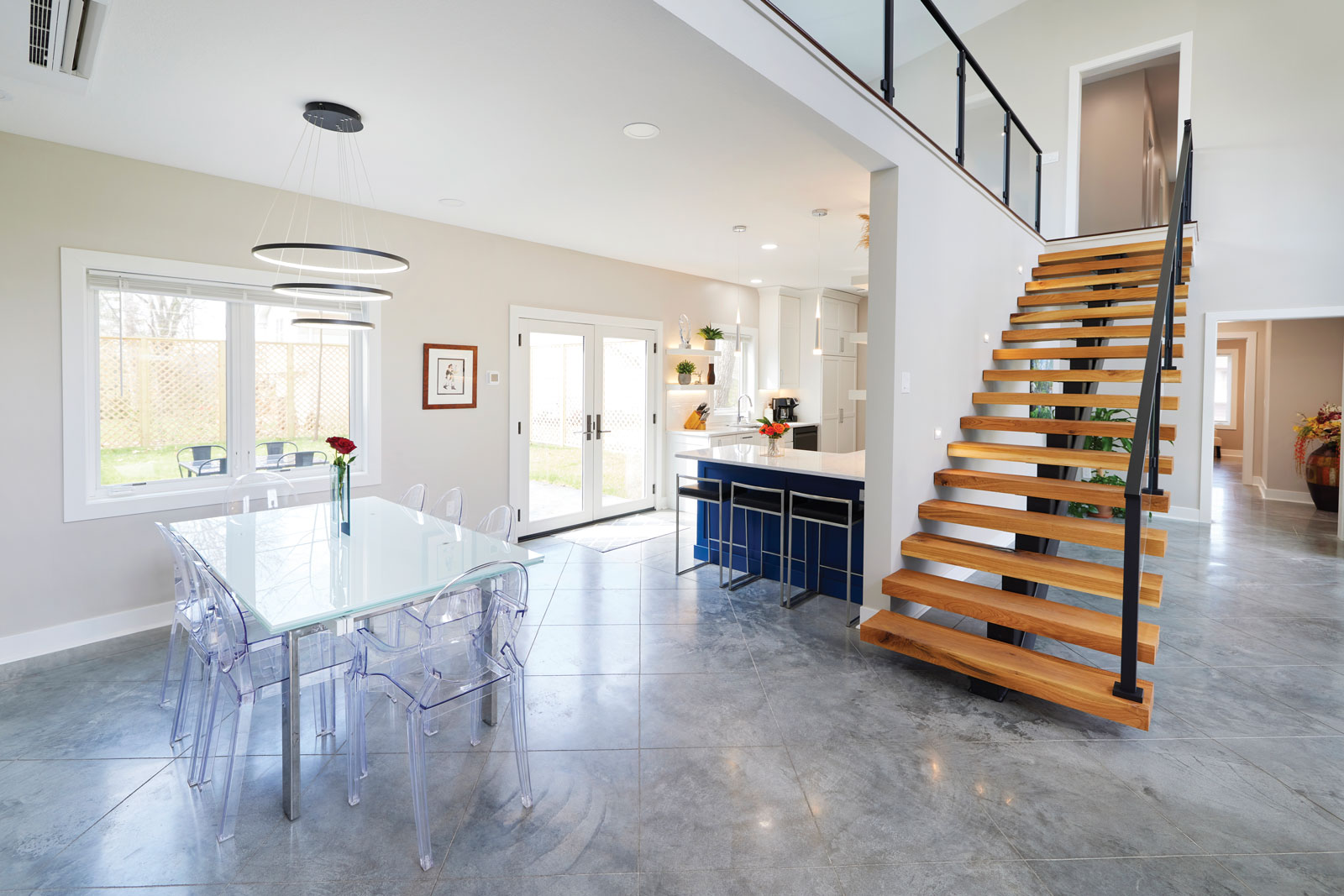 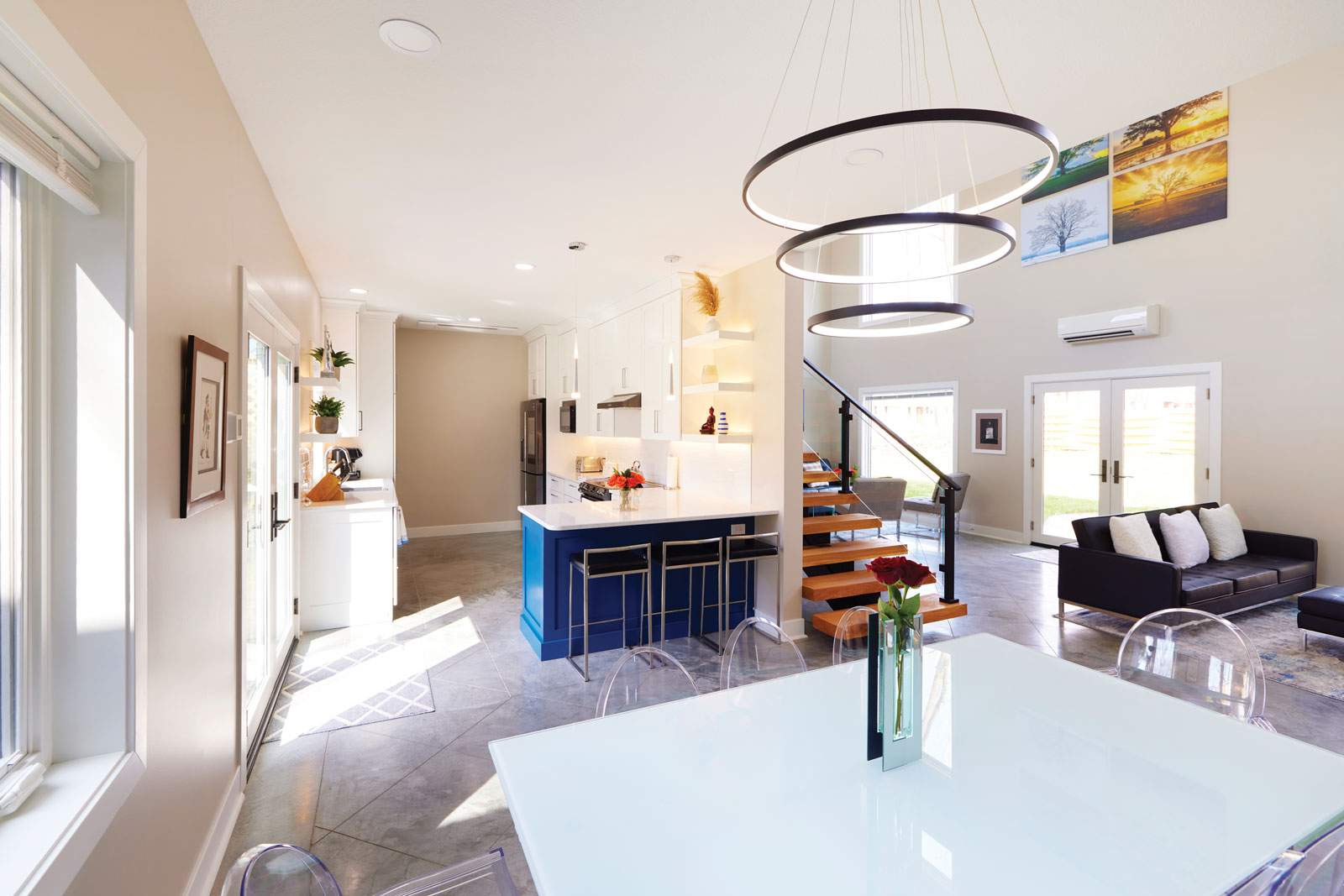 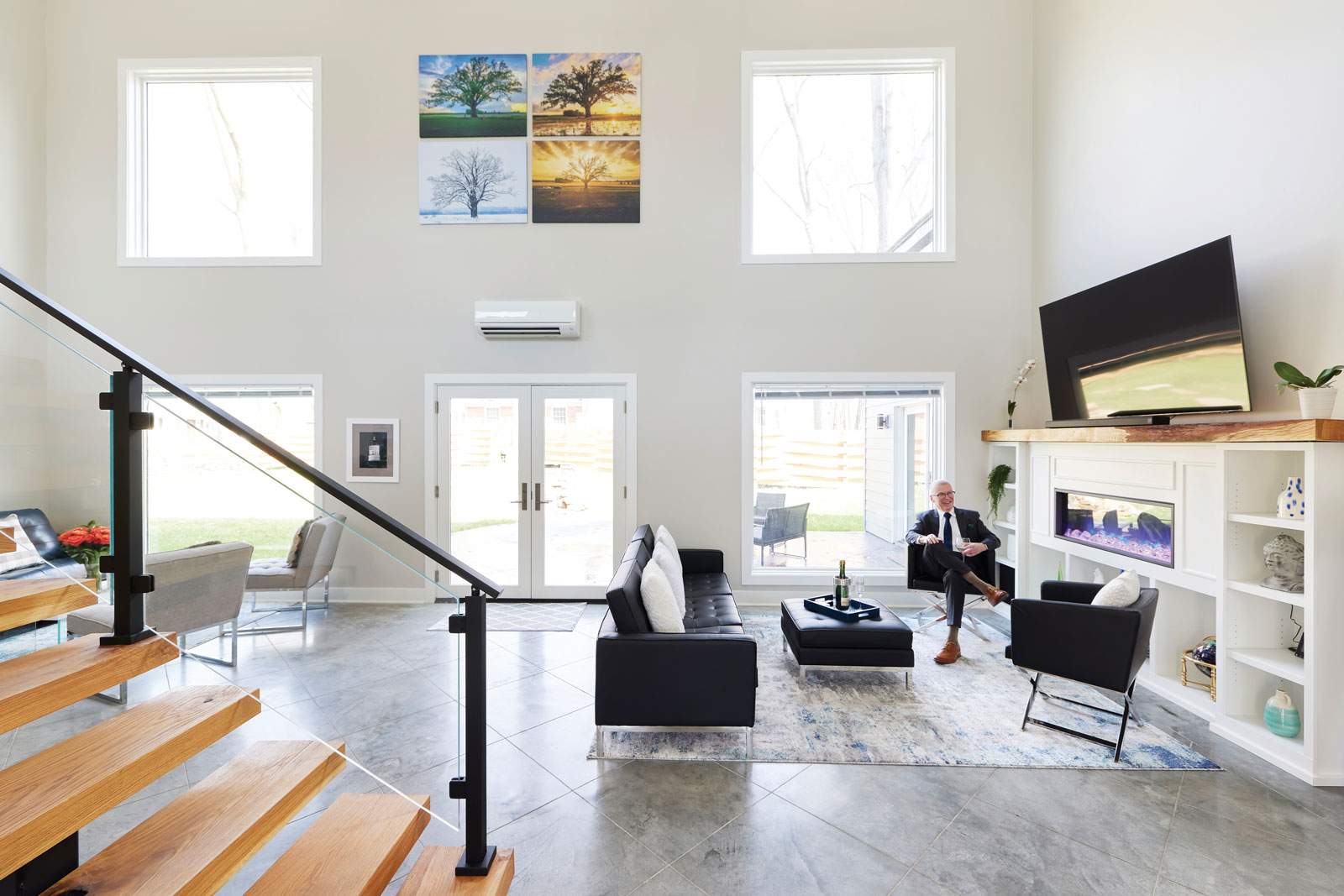 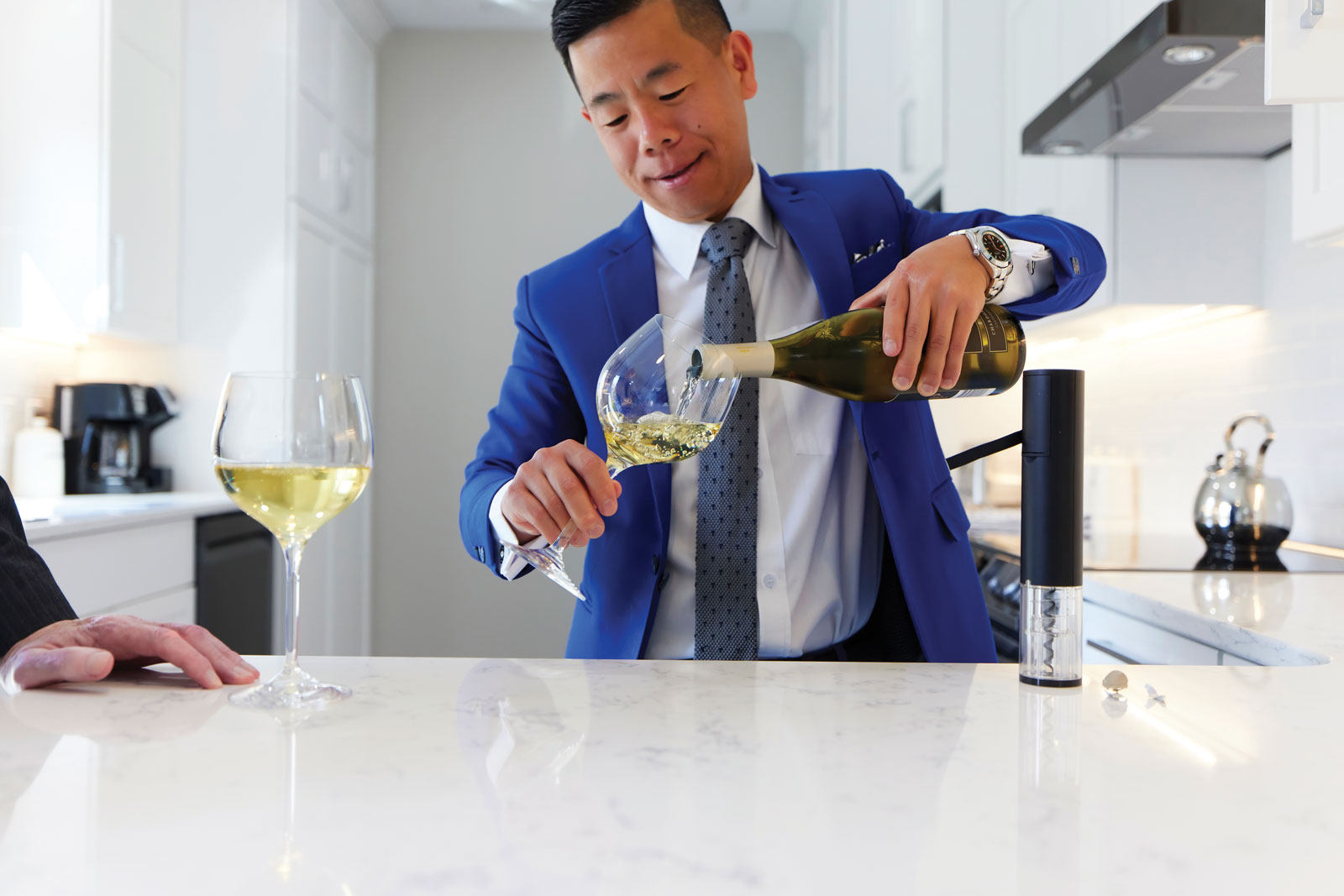 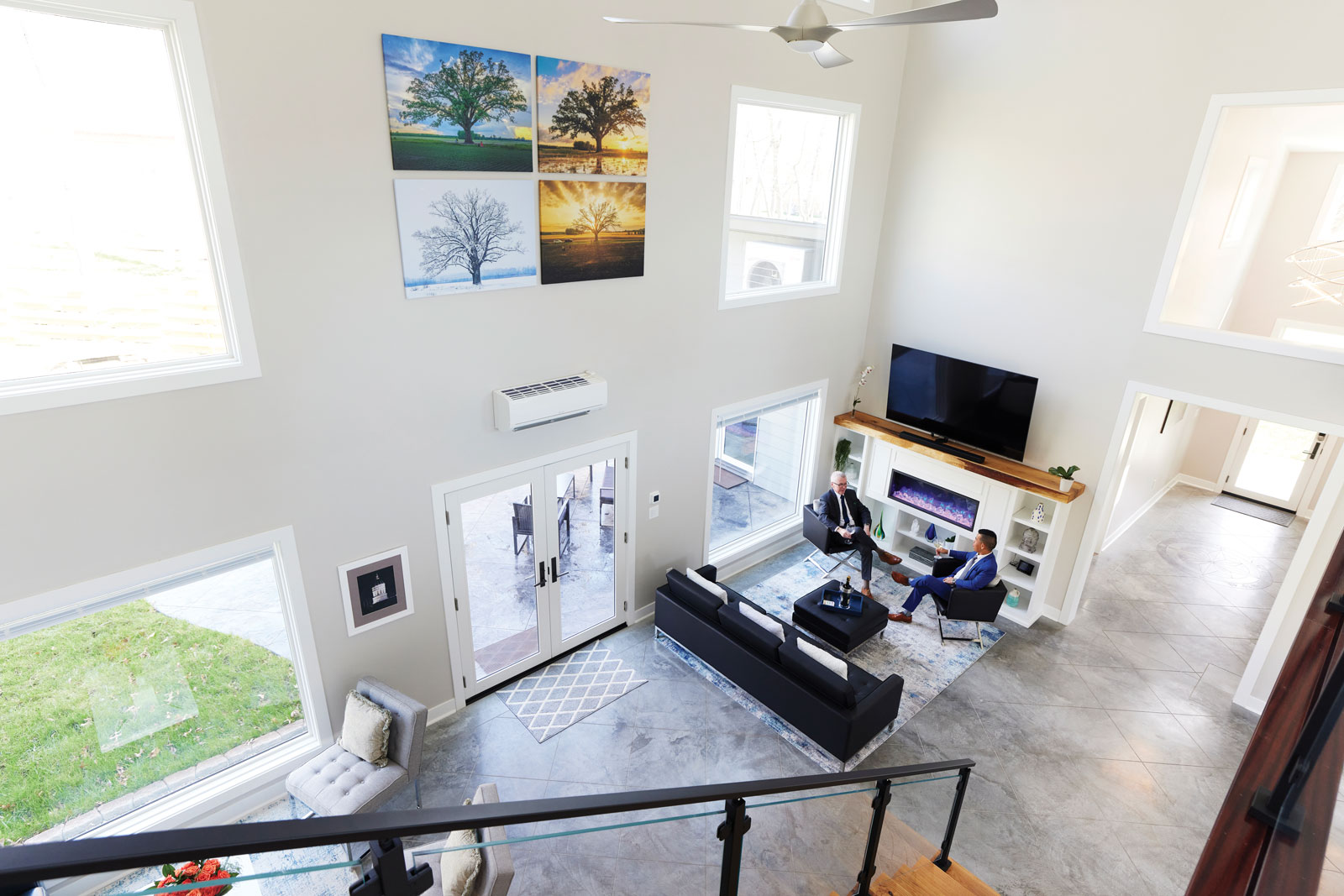 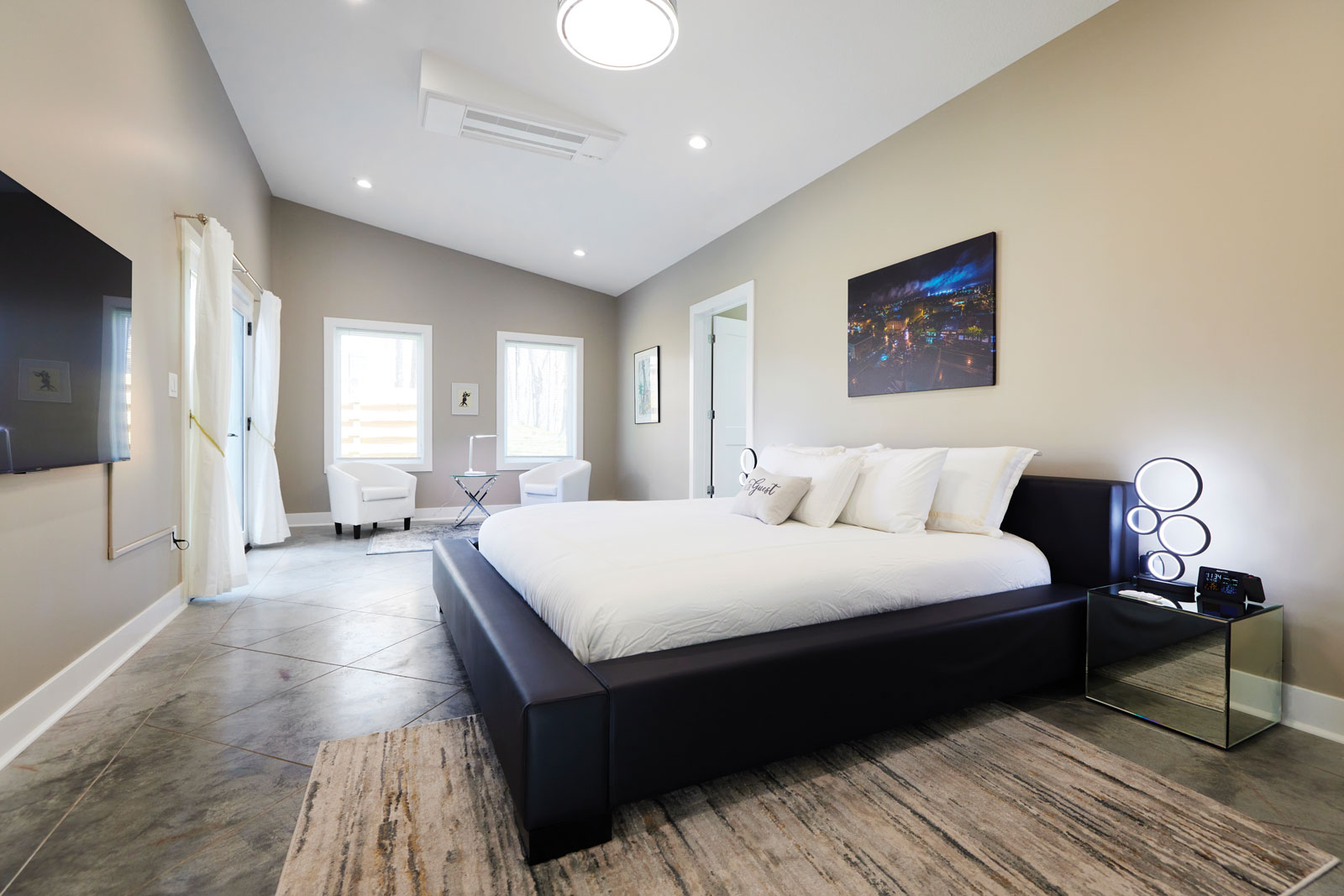 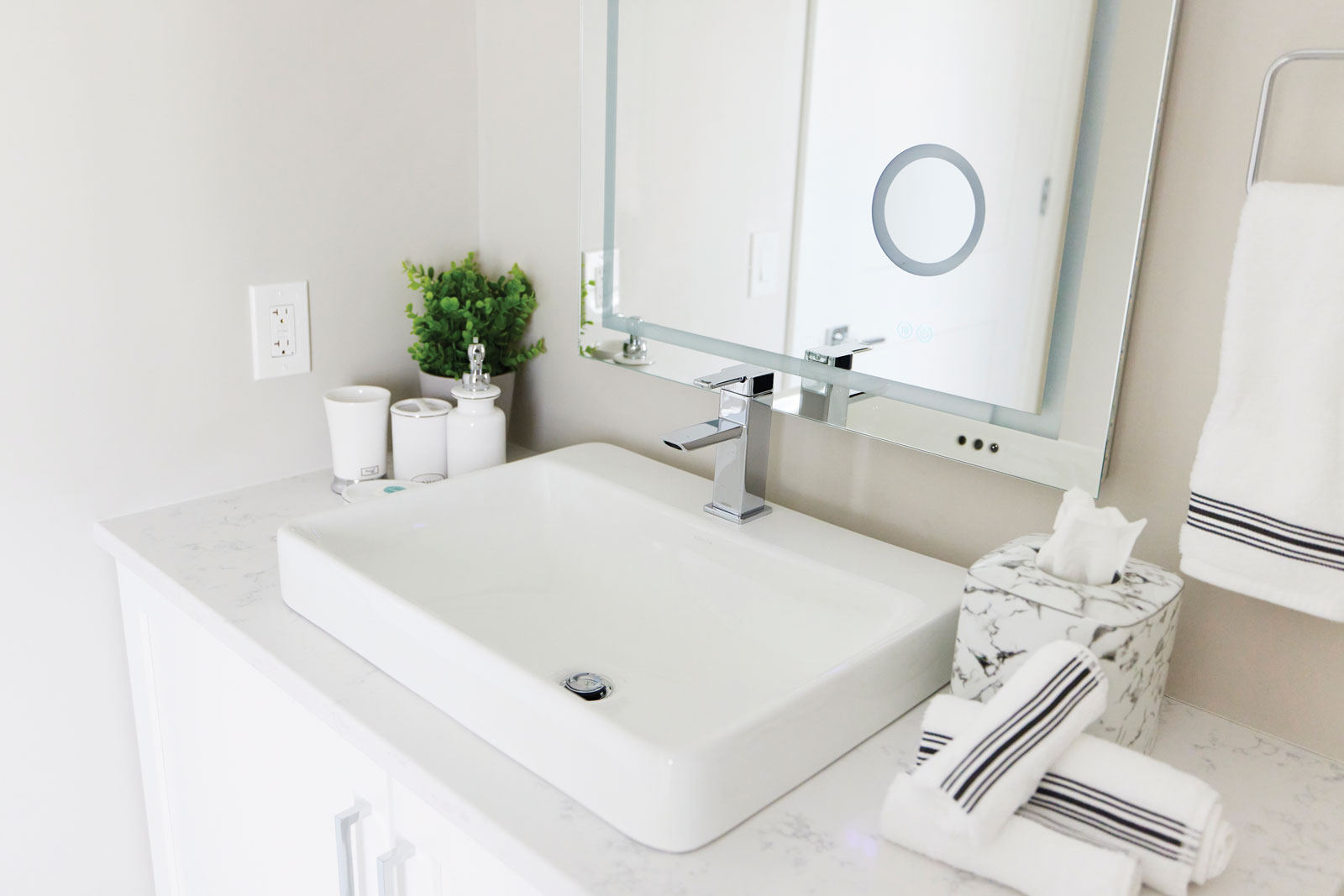 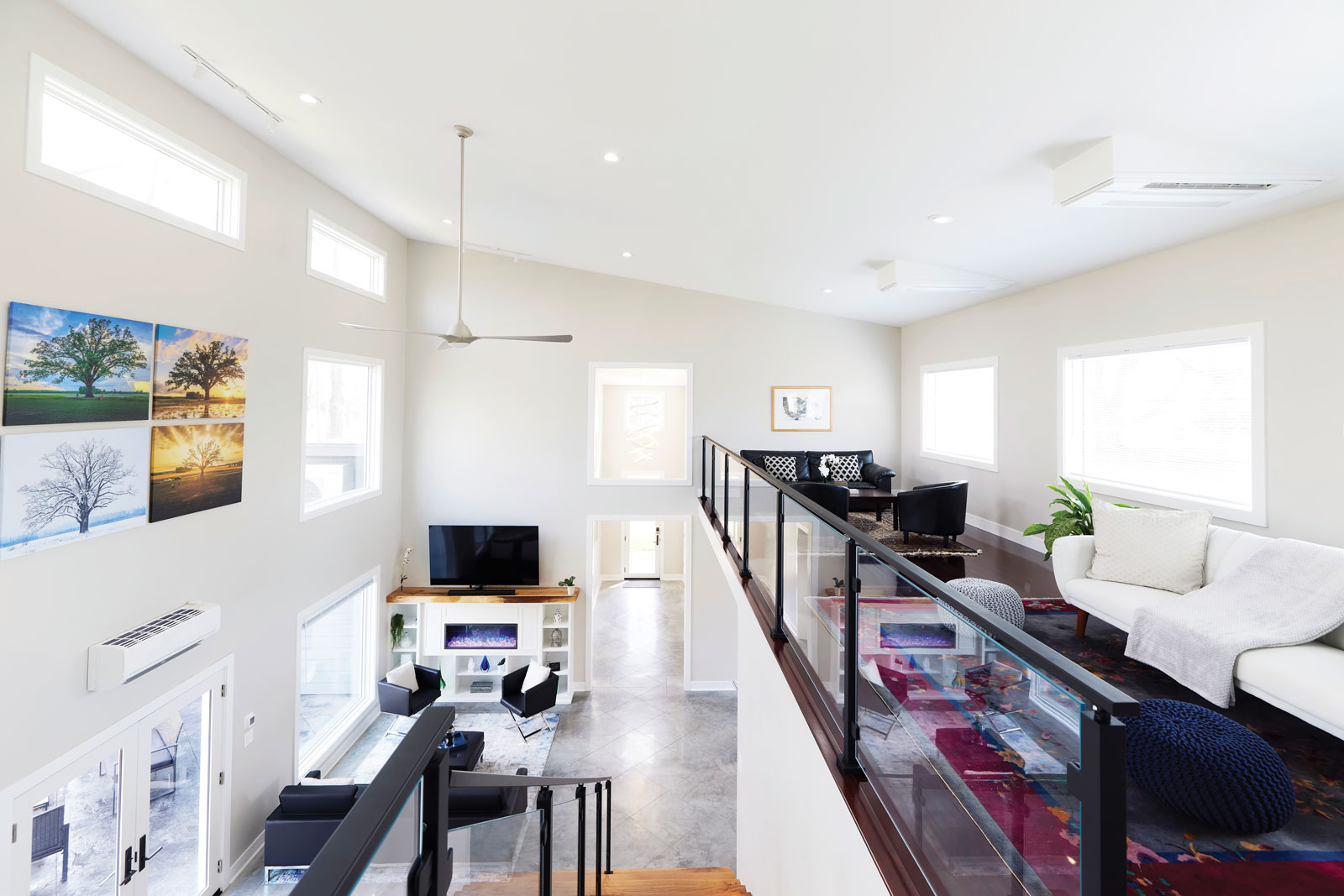 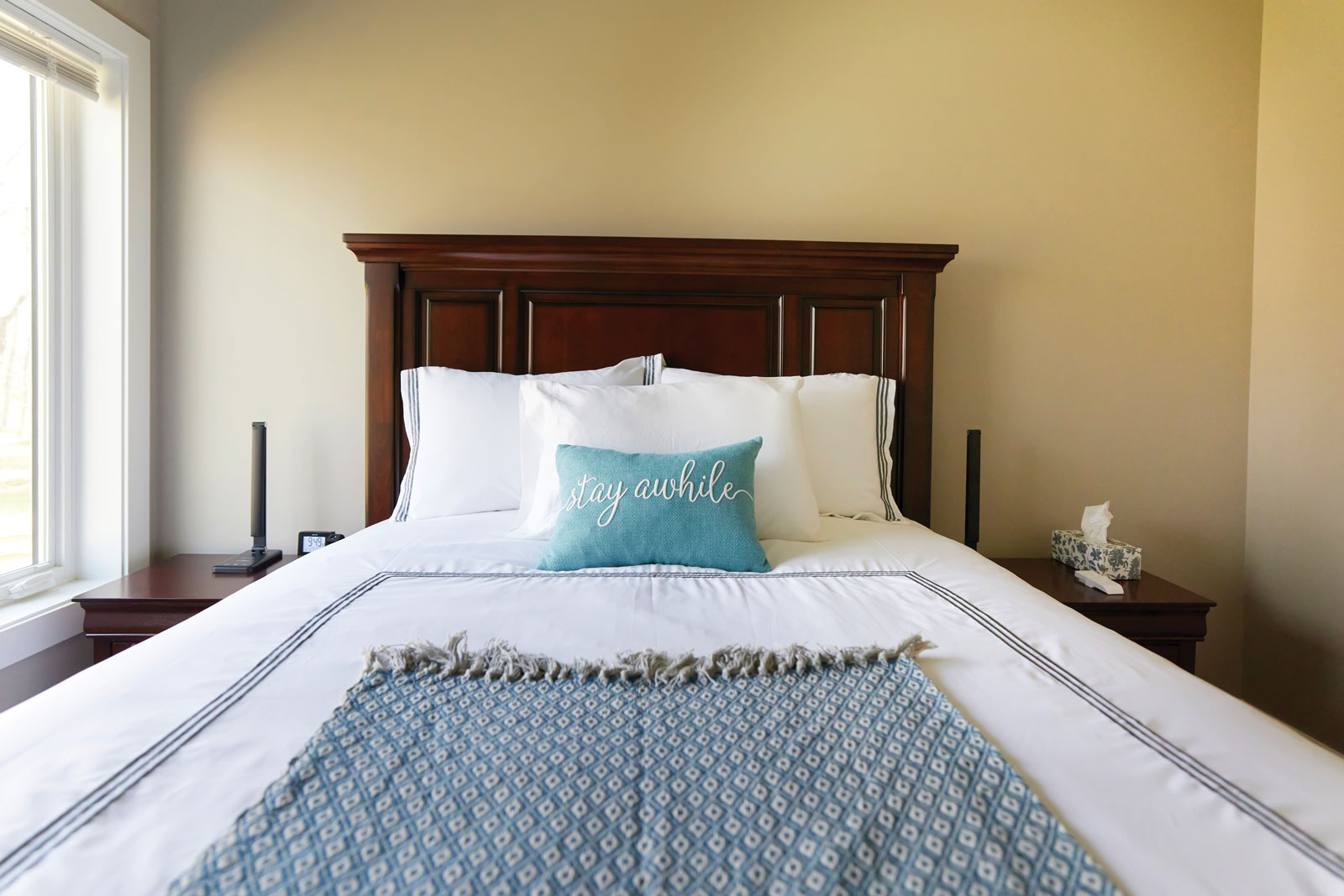 At the southeast corner of West Broadway and Stadium is a 4-acre estate with two enormous homes, addressed at 100 and 111 West Briarwood. Ed Brent and Yangmali Sahadev Rai co-own and rent out the Briarwood Estates properties through Airbnb, and the two homes couldn’t be more different.

The house at 100 West Briarwood is a historic 4-bedroom, 3.5-bathroom property that the pair completely renovated in 2019 for the sole purpose of renting out year-round (it can host up to 12). The 111 West Briarwood home is, by significant contrast, a new build finished in 2021 that exemplifies energy efficiency, minimalistic decor, and the ultimate in modern living. It also has 4 bedrooms and 3.5 baths, and can accommodate up to 11 guests. Ed has owned the estate since 1981, and it took almost a year to clear the land before the 111 property could be built.

Ed and Yang each are successful entrepreneurs who have known each other and worked together for years. Ed is originally from Belton, and he studied physics at MU before switching gears to get his master’s and Ph.D. in sociology. He did his post-doctoral work in artificial intelligence before opening up Ideaworks, a software company that creates AI programs to be used in social sciences. Considered a pioneer in this field, Ed was a sociology professor at MU for more than 40 years.

Yang, originally from Nepal, is vice president and COO of Ideaworks and is the founder of Paths Education Hub, which helps students with their college applications free of charge. He also is founder of the Yangward Foundation, a nonprofit that strives to help disenfranchised women in Asia and Africa engage in revenue-generating activities like goat and chicken farming. In 2013, Yang received a highly competitive grant from The Resolution Project in partnership with the Clinton Foundation to start the foundation. Ed is the foundation’s vice president and secretary.

In an established neighborhood of mostly ranch-style and split-level homes built in the 1960s, the modern silhouette of 111 W. Briarwood stands out on its wooded lot. The slanted roof of its middle section is covered in solar panels, hinting at the modern amenities awaiting inside. Entering through the front door, you will immediately notice the house’s tall ceilings and the compass etched into the floor of the entrance hall which gives the property’s exact coordinates.

“It’s concrete,” Ed says about the unique floor that runs throughout the main level. “It’s totally insulated down below, even down to the footings, so it stays at room temperature without having to heat it.”

Building a net-zero house that wasn’t boring was important to Ed and Yang. At 3,600 cavernous square feet, energy efficiency in the house helps keep costs down and is sustainable.

Off to one side of the entrance hall is the master bedroom and en suite. Over the bed is an unusual-looking light fixture that Yang is excited to demonstrate: It’s a ceiling fan with retractable blades that extend slowly as it turns on. A sitting area offers two leather club chairs by the windows that look out onto the backyard. Yang points out that each bedroom has its own smart thermostat so guests can adjust the temperature in each room. The en suite bathroom boasts a timeless white-on-white theme with white subway tile and white shower pan tile. A floating white double vanity is topped with marble, but perhaps the coolest bathroom features are the smart mirrors. Tap the mirror and it illuminates; push a button and the fog on the mirror will clear (another gadget that Yang excitedly shows off).

Beyond the entrance hall, the home opens into a grand living area where the slanted ceiling seen from the outside towers above connects with an outside wall stacked with several 6-foot windows that are triple-glazed for efficiency. This wall had to be pre-manufactured in Jefferson City and installed in one giant piece; even on an overcast day, the light streaming in makes you feel like you’re outside.

In the middle of the wall between the windows is a grouping of four large photos depicting the Big Bur Oak Tree in each season by photographer Heath Cajandig. Heath’s work can be found throughout the home adding warmth to the minimalist decor. Ed and Yang did not use a decorator, but rather chose the furnishings themselves. The living room to the right features two seating areas with sleek, modern black sofas and matching club chairs. They look out into the backyard that contains a basket-weave fence separating the house from the 100 West Briarwood property. A water feature cascades down the yard toward a patio.

“You can see the water feature from every bedroom,” Yang says, pointing to the intention behind the design.

The dining room to the left features a glistening frosted glass table encircled by clear, acrylic “ghost” chairs. A single glass vase sits atop the table, serving as a nod to their highly minimalist style. The dining room opens up to another patio that Ed says is the perfect place to enjoy your morning coffee.

Beyond the dining room lies the kitchen. The white-on-white theme continues here on the cabinets, counters, and tile. A splash of navy can be found on the lowers of a small peninsula that offers bar seating. And if the smart mirrors in the bathroom don’t impress you, the smart kitchen appliances sure will! A clear fan of gadgets, Yang likes to point out the cameras on the refrigerator that show the contents inside, as well as a control panel on the door that allow you to listen to music. The oven and dishwasher are also smart.

Between the living room and dining/kitchen, a towering staircase with Amish white oak steps extends to the second floor. Glass panels act as railings. A lofted living room awaits at the top, perfect for guests who want a little space, along with views of the backyard through the wall of windows.

Three more bedrooms and another 2.5 bathrooms round out this one-of-a-kind, state-of-the-art rental.

Yang says the patio-facing wall is their favorite part of the house. “We like [the] light coming in the large windows, creating a feeling as if you are living outdoors,” adding that so far there’s nothing they would change about their design decisions.

Wed May 11 , 2022
Our Memorial Day decor will help kick off the summer in style. As the unofficial start of the season, Memorial Day means backyard barbecues, outdoor picnics, and al fresco dinner parties.  Of course, the day is also about remembering the men and women who gave their lives for our country, […]